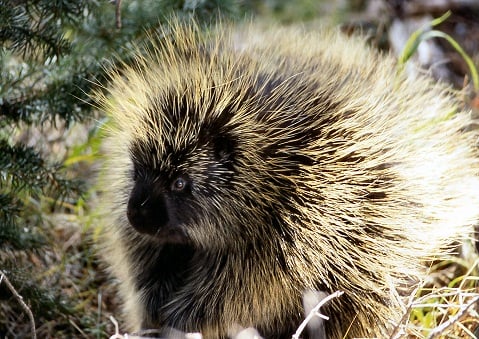 Firstly I apologise to my regular readers for not putting up any posts in the last few weeks (months!). My new job is going well, but as I’m sure you can all understand it has taken priority! But do not fear, I’m back, and I’m going to try my best to get posting regularly again! When I moved to Cambridge I had a lot of ‘stuff’ I had accumulated, including two very prickly cacti. One of the thorns from the cacti got caught in my finger and, when I tried to pull it out it snapped, so it was stuck in my finger! Highly inconvenient to me, but it did get me thinking about animal and plant defences, as well as the pain they can cause!

Last summer I worked at a zoo and I was always fascinated watching the Porcupines and their quills – ‘designed’ to protect them against predators.

The number of quills present on an individual is dependent on the species of Porcupine and is largely driven by selection pressures such as predators in their environment. The North American porcupine has around 30,000 quills on its back, one of the most of any species of Porcupine.

Research published in the Proceedings of the National Academy of Sciences and has shown these quills not only had a spike on the end, but also have microscopic barbs all along the quill, facing backwards. These barbs ensure Porcupine quills are extremely difficult to pull out.

But it isn’t just their ‘sticking power’ that makes these barbs exciting. The barbs also make the quills super streamlined, ensuring they enter flesh as smoothly as possible – using 70% less power than non-barbed quills.

As with many adaptations in the animal kingdom, there is great potential for these structures to be applied to modern day practices. The researchers suggest this discovery could lead to the next-generation in medical adhesives, replacing staples or sutures.

The applications for this research are still considerably far off being brought to market. However it is important to recognise, adaptations in nature have been trialled for thousands, sometimes hundreds of thousands of years, as they evolve to suit their environment. Therefore it makes sense to take inspiration from the natural world if we are to find novel ways to progress in our own future.