It has been my intention to write a post telling you all about my new pets – I have recently bought and set up a tropical aquarium. I have wanted to have fish since I can remember and even insisted on having an ‘under the sea’ themed bedroom for many years! Anyway a couple of months ago I decided to take the leap! Picking which fish to have was not easy, but I now have a small community of fish that I am more than happy with! I like my fish to have something interesting about them, a bit of history if you like. This might be where they came from, a novel feature they have, or perhaps just a great personality (I may or may not have imagined!).

The most recent arrivals: two beautiful Peter’s elephantnose fish (see picture). I imagine your first reaction is something like “what is that!” The love child of a dolphin, elephant and a shark perhaps? When I saw these fish in the pet shop it was one of those ‘I have to have one’ moments. But once I had them settled in to their new tank, the scientist in me shone through and I started to research what I had bought! (As usual the pet shop in question had been very vague and I suspect knew as little as me).

Peter’s elephantnose fish are native to the rivers of west and central Africa. They tend to be found in muddy, dirty water and are a brown/black colour. The Peter’s elephantnose fish is best known, predictably, for its ‘trunk’ which is found just below the mouth. An elephant’s trunk is an amalgamation of the nose and upper lip, but a Peter’s elephantnose fish has a trunk made from part of the lower mouth. It is fascinating watching my two elephantnoses routing through the gravel in my tank in search for blood worms! Their nose is actually incredibly sensitive and is covered in tiny receptors. These receptors can sense local movement and help detect both predators and prey in their dark habitat in the wild.

Perhaps even more abstract, Peter’s elephantnose fish are also able to emit sonar-like noises. These clicks can be heard using audio equipment when the fish are excited. It is thought that because these fish live in dark conditions their eyesight was not the most important sense. As a result their sight became weaker and other senses that could be utilised became stronger. The elephantnose fish are able to use their sonar waves to detect moving prey or predators.

The final obscure throw of the dice for these creatures is their eyes. For many years it was thought these fish were blind because of the dim light they had evolved in. However further research has shown their eyes contain crystals that enhance the environmental light and ensure their eyes are at least of some use. 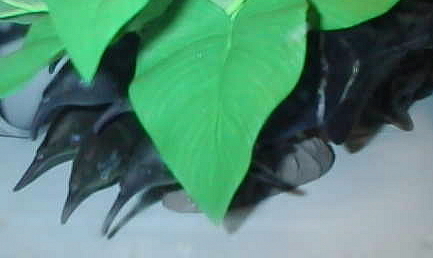 It is clear these fish are special, but what I find most fascinating is the way in which they have adapted to their environment. They have a highly sensitive ‘trunk’ to find prey, sonar to detect prey and avoid predators, as well as a novel way of enhancing their eyesight. The result, a fish that doesn’t really look like a fish! They can even swim backwards!! The extent of their difference simply demonstrates the way in which natural selection works. It doesn’t matter if nothing else does it, or if it looks a little obscure. If it is an advantage then it stays and the results can be beyond anything we would expect.

5 thoughts on “Do you really know what’s lurking in the depths? Meet Peter’s elephantnose fish.”