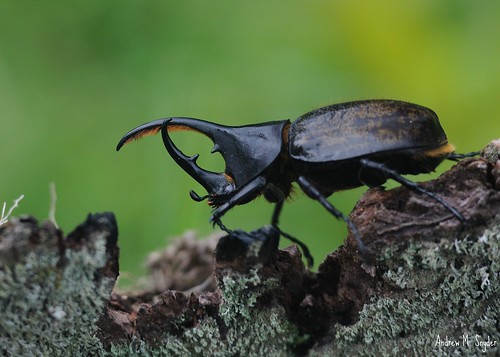 One of the greatest drivers of evolution is sexual selection, producing some of the quirkiest and bizarre characteristics on the planet. An interesting example is the male rhinoceros beetle. As the name might suggest, the beetle has a large horn extending from its head. The horn has no survival advantage other than it being used in fights with other males. Each male’s horn differs in size and shape. Scientists have been able to attribute this variation to the diet quality and resistance to illness of each individual.

This is not a new hypothesis. Scientists have long thought that by being more resilient to disease and having a better quality of diet, individuals have more energy to spend on creating brighter coats, more impressive patterning, or in this case, a larger horn. Furthermore scientists have found that cells within the horn are more sensitive to insulin pathways. These pathways are known to promote tissue growth and body size.

It therefore makes sense that a high quality male with good nutrition levels has a larger horn than a male with poor nutrition levels. But what does this mean in the ‘grand scheme of things’? Male rhinoceros beetles use their horn to fight. By having a larger horn they are more likely to defeat the opposition. By doing so, the winner climbs up the pecking order and wins access to females for mating. This is exactly how sexual selection works. There is evidence of this variation all over the planet and without it our world would certainly not be the colourful wacky one we know and love.

2 thoughts on “Bigger is better: the male rhinoceros beetle.”