Across the entire animal kingdom there are some fascinating, sometimes even unbelievable characteristics. The adaptations that have made it through natural selection, been accepted by females and after all that aren’t a disadvantage, are truly exquisite. How do these adaptations come about? Random genetic mutations are at the beginning of every single adaptation on this planet. It is these mutations within the gene that are responsible for colouration, size, shape and many more! Sometimes mutations can result in something which is not advantageous – a mutational disorder. The disorder I wanted to discuss today is albinism.

Albinism is a disorder characterised by the absence of pigment in the skin, hair and eyes. It is caused by a mutation in the gene that is responsible for the enzyme that makes melanin. This gene is known to affect all vertebrates, including humans. There are numerous associated secondary effects of albinism such as vision defects and a greater susceptibility for sunburn and skin cancers. Furthermore there are social stigmas in human society leading to albinos being ridiculed, bullied and in some parts of the world, being killed to use their body parts in potions.
Non-human animals that are albino tend to have very low survival rates in the wild. Because they are albino, they lose their protective camouflage and sometimes struggle to reproduce as they are perceived as different to the rest of the population.

The fascinating individuals that have albinism do not stop with Iceberg. Snowflake was an albino Western Lowland Gorilla who resided at Barcelona Zoo. As I’m sure you can imagine albino animals are very desirable and therefore can fetch a high price. When Snowflake was discovered in the wild in 1966 his entire social group was killed, including his mother who he was found clinging on to after the massacre. Snowflake lived out a long life at the zoo and was even the unofficial mascot of the city, but there is a certain element of sadness that he was taken away from his mother just because he looked different. 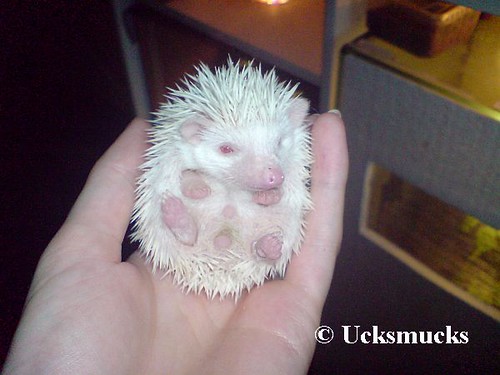 Finally, there is the exceptionally cute albino pygmy hedgehog. This group of albinos is a subset of the domesticated hedgehog. They have been popular since the early 1980s and are bred by many RSPCA centres. The internet is littered with a considerable number of adverts to buy these animals for around £120. There are many restrictions to owning these animals because of their ability to spread diseases such as Foot and Mouth. Again, would these animals be so popular if they were not so different? Hedgehogs travel many miles each night and usually hibernate in the winter. Do they do that in their cages?

While these animals are fascinating to see, Snowflake’s case is not an isolated incident. Humans have always been driven to collect the rare and exotic, whether it is in a zoo or to keep at home. On one hand, these animals do have a shorter life expectancy in the wild, but on the other hand is it right to capture these animals or to breed them? The reality of the matter is these animals wouldn’t be so popular if they were not so different. There also wouldn’t be awful situations such as Snowflake’s if people understood the hardship these animals have had to go through to for public amusement. It is one thing to capture species under threat and bring them to the wild, it is another to capture an animal and tear it away from its family and home because it looks different and humans will pay to see it.